Tips and Tools for a Sparkling Clean Smartphone 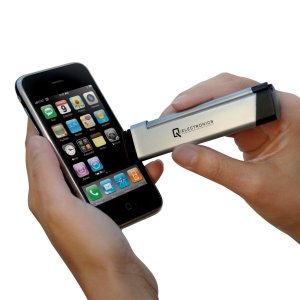 Your smartphone screen is likely a gross gallery of smudges and fingerprints, but it’s what you don’t see that you should worry about cleaning. Phones play host to a plethora of germs and because you handle your smartphone all day long, you’re touching all kinds of bacteria, viruses and other hazardous substances constantly.

Unlike many household surfaces, your smartphone takes some special care when cleaning it. Don’t try to clean your smartphone using household chemicals like glass cleaners, bleach or other corrosive solutions. Also, don’t attempt to wipe the screen using a paper towel or napkin — these will scratch the delicate screen. END_OF_DOCUMENT_TOKEN_TO_BE_REPLACED

Check out this great video that has already gone viral!!! Enjoy!

At the recent Mobile World Congress event, Google’s CEO, Eric Schmidt, confirmed that the Android Market app numbers have now topped the 150,000 mark. On top of that he claimed that are over 350,000  device activations every day.

Those are some very impressive numbers. However, Android still has a long way to go to catch up to the iPhone apps count which recently surpassed 350,000 on the App Store.

Plus, it seems 350,000 is some sort of magic number. According to executives at Intuit, their company has seen over 350,000 downloads of their tax return SnapTax app in less than three weeks after the app went live on the iPhone and Android smartphones.

Xploding Boxes (also known as Exploding Boxes) is a strategy game for BlackBerry that was released this weekend on BlackBerry AppWorld. The goal of the game is to start a chain reaction that will explode all of the boxes on the screen. Each level gives you a different number of clicks, and requires a different strategy to solve. The first 25 levels are free, while the rest of the levels can be accessed by making an in-application payment.

The Xploding Boxes starts with five levels unlocked, and every time you beat a level, an additional level is unlocked. The end result of this is that if you ever get stuck, you can usually just skip ahead to the next level, because there are always a few that are unlocked.

The plan is to continue to release additional content and levels for this game. Version 1.1 of Xploding Boxes will add levels 101-120 and will be released by the end of February.

The game can be download for free with the first 25 levels available at no cost at all. Access to the remaining levels can then be gained by making a one time in-application purchase. This is done using the brand new In-Application payment API that was recently added. By using this when you upgrade to the full game, you do not lose any of the progress that you had already gained up to that point. This also requires that you have version 2.1 or higher of BlackBerry AppWorld installed.

“This Spring, expect to see a lot of people with their heads down and thumbs up,” said Peter Farmer, Head of Marketing for North America, Sony Ericsson. “Xperia PLAY combined with the power of the Verizon Wireless network gives you everything you need in a smartphone and the one thing you want – the ultimate gaming experience.”

Xperia PLAY is powered by the latest version of the Android platform (Gingerbread version 2.3) – and is PlayStation certified, which ensures an optimized gaming experience featuring content from the PlayStation Suite.  Xperia PLAY will provide a best-in-class gaming experience right out of the box with many of the most popular games pre-loaded, including Asphalt Adrenaline 6, Bruce Lee,  Star Battalion, The Sims 3, and Tetris. More than 50 additional titles from top franchises at leading game publishers will be available for purchase at launch.

“Working with Sony Ericsson to bring the world’s first PlayStation Certified smartphone to the nation’s most reliable network builds on our commitment to deliver the best mobile gaming and entertainment experience to our customers,” said Jeff Dietel, vice president-marketing for Verizon Wireless.

According to the Entertainment Software Association’s 2010 consumer survey, in the United States:

iPhone 4 Now on the Verizon Network!

If you’re planning to order the iPhone 4 with Verizon’s network access, here’s the info according to Apple:

Order an iPhone 4 from the Apple Online Store and have it shipped free to your door. Or reserve an iPhone 4 on February 9 for pickup at your favorite Apple Retail Store starting February 10 and get Personal Setup.

Order an iPhone 4 from the Apple Online Store and have it shipped free to your door. Or stop by an Apple Retail Store starting at 7 a.m. to buy an iPhone 4 on a first-come, first-served basis.

Click HERE for more info on the Verizon Service Plans.

“b mine” “I ❤ u” “ur hot” – not exactly sonnets, but these little love notes are what today’s teenagers are most likely to send and receive on February 14…

Nearly 40% said they think it’s ok to tell someone “I love you” for the first time via text message, and 35% have actually done it

Clearly the rules of love are changing in the digital age – so what does a romance today look like?  textPlus resident “textpert” Drew Olanoff offers these tips for texters in love:

2.          Send your Valentine a photo of you blowing a kiss or making a heart shape with your hands – visuals can be sweet

3.          Surprise your significant other by texting “open the door” or “look outside” and be ready and waiting with a bouquet of flowers

5.          No Valentine this year?  Group texting and communities of single friends are the perfect place to commiserate together

“Windows Phone 7 offers a compelling smartphone experience in general, and we’re thrilled to be unveiling what we believe will be the definitive user interface for sports fans on the Windows platform,” says Dale Fallon, Director, Mobile, Score Media Inc.

Features of ScoreMobile on the Windows Phone platform include detailed coverage of top pro and college sports, as well as an optimized user experience utilizing core Windows Phone 7 design elements. Users will be able to personalize their ScoreMobile dashboard with one of four unique background images offered to fit individual tastes.

“We’re thrilled to see ScoreMobile, one of the most popular mobile sports applications on the market, join the growing number of top-notch apps available for Windows Phone 7,” said Tim Darling, Windows Phone Lead, Microsoft Canada. “Today, over 20,000 developers are bringing an average of 100 new applications to Windows Phone Marketplace each day.  ScoreMobile is a huge score for all sports fans enjoying Windows Phone 7 devices.”

Canalys today published its final Q4 2010 global country-level smartphone market data, which revealed that Google’s Android has become the leading platform. Shipments of Android-based smartphones reached 32.9 million, while devices running Nokias Symbian platform trailed slightly at 31.0 million worldwide. But Nokia did retain its position as the leading global smart phone vendor, with a share of 28%. The fourth quarter also saw the worldwide smartphone market continue to soar, with shipments of 101.2 million units representing year-on-year growth of 89%. The final quarter took shipments for the year to fractionally below 300 million units, with an annual growth rate of 80% over 2009 (see table below).

In Q4 2010, volumes of Google OS-based smartphones (Android, OMS and Tapas) were again boosted by strong performances from a number of vendors, notably LG, Samsung, Acer and HTC, whose volumes across these platforms grew 4,127%, 1,474%, 709% and 371% respectively year-on-year. HTC and Samsung together accounted for nearly 45% of Google OS-based handset shipments. – Canalys Report

According to a recent study by the Nielsen Company, 67% of US mobile phone users age 15-24 have a  “feature” phone.