A new animated movie called Rio based on two blue birds (macaws) that travel to Rio de Janerio, slingshots into theaters on April 15, 2011.  The film is produced by the same team that created the Ice Age movies and is expected to be another big hit. So, what does this got to do with apps? WELL… the smart folks over at Rovio, makers of the famous Angry Birds apps, will have a movie tie-in. They’re creating another special game app called Angry Birds Rio based on the new movie where two of the main characters from Rio are captured and need to be saved.

To get the behind the scenes scoop on what’s happening with the future of Angry Birds, check out the interview with the CEO of Rovio, Peter Verterbacka. Here’s the Link:

Angry Birds fans will also be happy to know that many more AB products are on their way to various retailers around the country.

Anyone who owns an iPhone or iPod Touch has probably heard of or played the popular Angry Birds mobile game. Now Mattel is expanding the Angry Birds fun into a table top game. The game is set to launch in May 2011 with a suggest retail price of $14.99. Here are the details: 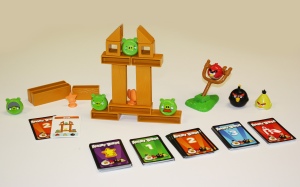 Based on the #1 paid iPhone game – Angry Birds, Angry Birds Knock On Wood game brings big app fun to physical reality! Now in a table-top game format, build, launch and destroy with exciting skill-and-action just like the app. Getting started is a breeze! One player draws a construction card and builds the structure shown. Next, an opponent  loads an Angry Bird onto the launcher and catapults the bird to knock down structures and pigs. The player with the most points and knockdowns wins! Features three Angry Birds, green pigs, one slingshot-style launcher, structure pieces and multiple mission cards. For one or more players. Stay tuned to https://phoneappsmag.wordpress.com more details.